Living has been collaborating with the executive communications team at CFA Institute since late 2019 when Margaret Franklin, CFA, was appointed their new President & CEO. The success of our ongoing management of her social media messaging resulted in LinkedIn naming Marg one of their Top Voices in Finance for 2020.

As always, Living was looking to create more difference and help our client take the impact of their comms strategy to the next level. We focused on the importance of the CFA global community and the universal recognition of its credential: the Chartered Financial Analyst designation. We believed that if we could connect charterholders around the world, they could attest to the value of being CFA members.

We proposed a LinkedIn campaign in which Marg would share her own story of pursuing the charter – an authentic tale that would reveal a very real humanity not expected in the investment management industry. To give this post some calculated power, we created a custom hashtag: #mycharterstory. And we had Marg tag 20 senior staff members around the world, inviting them to then create their own post, revealing their personal story, and tagging a new set of charterholders.

Our intention was to launch a relevant campaign that had the potential to become global and viral.

Our strategy soon paid off as Marg’s initial post snowballed into an immediate series of posts that then created a domino effect, scattering in different geographical directions, with charterholders proudly sharing their stories and tagging more and more colleagues.

After just four weeks, more than 275 new stories were posted to LinkedIn – at least a dozen by people who hadn’t been tagged but were eager to participate. With more than 250 people following the hashtag, it was cited in over 420 posts that had a cumulative total views of 23,290. And it continues today!

By connecting charterholders on six continents and dozens of countries, the campaign created an open conversation about the very personal trials that each individual undertook to complete the rigorous and demanding requirements for earning the CFA charter. And along with those stories were words of great triumph and pride, as the charterholders revelled in the camaraderie they have experienced in the organization and the value realised over their careers.

A second objective was also accomplished by this viral campaign: it showed an audience of potential candidates the benefits of committing to the CFA charter – through genuine testimonials that rang true with more honesty than any ad campaign ever could.

It was this inspiration that the Living team originally targeted as we conceptualised and planned a way to convey and connect the humanity that plays such an important, but often overlooked role, in financial and professional services.

If you would like to learn how we can help you find the inspiration in your brand, please contact Duncan Shaw in New York, Greg Hobden in London or Gigi Yung in Hong Kong. 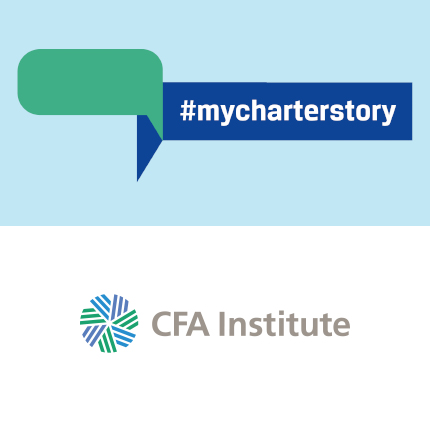 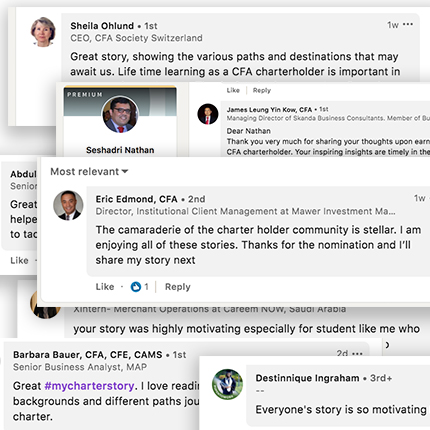